The Colorado River flowing through the Glenwood Canyon

A plaque provided by The Association of Engineering Geologists at the Grizzly Creek Rest Area reads: (Click to expand)
“Interstate 70 through Glenwood Canyon

The toughest 12 miles of the Interstate System

In 1874 Glenwood Canyon was considered impassable; even Ute indian trails avoided this narrow rugged gorge. In 1885 David Henry Moffat started driving the Denver & Rio Grande Western Railroad along the southern bank of the Colorado River, completing the project on October 5, 1887. The railroad had conquered the canyon! However, the canyon also impacted the railroad! General Motors executive C.R. Osborn “put the see in scenery” when he developed the concept of the vista dome passenger car while traveling through the canyon on July 4, 1944.

Colorado District Attorney Ed Taylor envisioned a highway through the canyon in 1887. It was not until 12 years later that funding was secured for the Taylor State Road from Denver to Grand Junction. Over $30,000 was spent pushing the single-lane road through the canyon from 1900 to 1902. The road was upgraded in 1914, and again in the 1930’s when Highway 6 & 24 was built at a cost of $1.5 million. Planning for the Interstate Highway System in Colorado began in 1958. However, it was not until 1975 that the route through Glenwood Canyon was finally selected.

The Colorado Legislature called for “the wonders of human engineering to be blended with the wonders of nature.” The freeway you drive today meets these instructions: terraced roadways, viaducts and tunnels carry Interstate 70 over reclaimed scars of Highway 6 & 24; cut and fill quantities were carefully balanced to use all the material; talus slopes were stabilized for bridge foundations; special fences minimize rock fall hazards; advanced earth reinforcement technology matched the roadways with the canyon; rock reinforcement technology made it possible to have natural safe exposures of rock; landforms were strictly preserved to and restored; blasted rock faces were stained to match natural exposures; comfort station buildings were earth-sheltered to blend them into the landscape and reduce energy consumption; and unique composting toilets require no water to operate.

After more than 22 years of planning, design and construction, the $500 million project was described by a former adversary as “a prototype for future highways in environmentally sensitive terrain.” The interstate has not conquered the canyon! Instead, a super highway blended with the environment was created by the Federal Highway Administration, Colorado Department of Transportation, Colorado Transportation Commission, Glenwood Canyon Citizen’s Advisory Committee, 15 construction contractors, 12 consulting firms, 2 design consultants and a program management consultant.

The Association of Engineering Geologists is honored to designate Interstate 70 Through Glenwood Canyon as an outstanding environmental and engineering geologic project.

The Horseshoe Bend area has drawn sightseers for over one hundred years. Artist’s Point, an area along the Scout Trail on the south side of the river, was a favorite viewpoint. In 1968, the original highway which followed the curve of Horseshoe Bend was rerouted through the tunnels and the old highway became this trail. As highway construction in Glenwood Canyon is completed, the new bike trail will continue on through the canyon.

The Colorado River was named the “Bunkara” by the Ute Indians and later the “Rio Grande de Buena Esperanza” by early Spanish explorers. From Glenwood Springs, streams entering the river include No Name and Grizzly Creeks. Shoshone Falls lies upstream from the historic Shoshone hydroelectric plant. A popular tourist attraction is Hanging Lake and Spouting Rock, up Dead Horse Gulch.

The Glenwood Canyon is certainly one of the most beautiful places on earth. Originally called Canyon of the Grand, its name was changed by official decree in 1914. The Denver and Rio Grande Railroad came to Glenwood Springs in 1887 after spending over $2 million dollars for canyon construction. The “Vista Dome” railway car was invented by C.R. Osborn, a vice-president of General Motors, who frequently traveled this route and thought passengers should take in the full glory of the rugged canyon walls.

Taylor State Road (now Interstate 70) was first constructed as a Denver to Grand Junction route in 1906 at a cost of $60,000 over half of which went into the Canon portion of the road.

The unincorporated town of No Name was settled in the early 1880’s by homesteaders and became home to No Name Canyon Sawmill. Bennett Sawmill was located at the grassy meadow south of the river and east of No Name. A U.S. Forest Service trail follows No Name Creek up to the Flat Tops.” 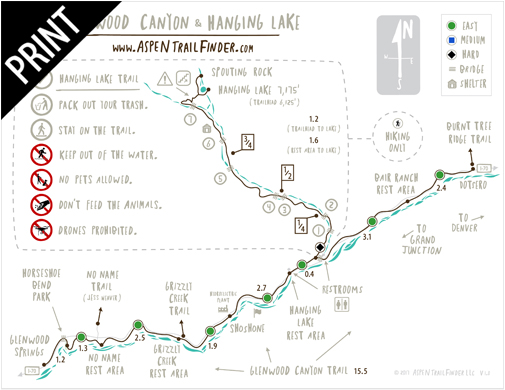