The National Register of Historic Places description reads: (Click to expand)
“The Smuggler Mine site may well be Aspen’s most historic site. It is the only remaining major mine site where one of the original silver strikes was made in the Roaring Fork Valley in 1879. This site is clearly associated with the opening up of other silver mines in the area which became the basis for the 1880 founding of Aspen, one of Colorado’s prominent 19th century mining towns. It is the only mine site from the 1879 period still visible from the town where once dozens of mines dotted the flanks of Aspen and Smuggler mountains. The Smuggler site possesses an integrity of location and setting which has seen little change over the years. Except for the original buildings, the site still retains the essential physical features which, characterized the use of the site during its period of significance, such as the dumps, the tunnel openings and the thirty-eight levels of underground diggings. The Smuggler, one of the top ten silver mines in the U.S. in the large production of high grade ore, is also significant for its long-time association with David Marks Hyman and his descendants, who still own the mine. Hyman, who became the mine’s owner in 1880, may have been the first eastern capitalist to invest in Aspen’s mining future. Of Hyraan’s other Aspen mining investments, the Smuggler is the only one that still retains any integrity as a site of mining activity. The Smuggler is also the only remaining mine site most associated with pioneer mining men and town promoters, Charles B. Hallam and Professor B. Clark Wheeler. The Smuggler’s period of significance has been extended to 1918, beyond the 1893 date of the Aspen Multiple Resource nomination to include the later mine history and because of the importance of the continuing operations of the Smuggler after the 1893 Silver Crash when most of the other Aspen mines closed down. The Smuggler finally ceased operations about 1918 when there was a general economic slump in mining as the availability of minearal resources declined and the costs of production increased.”
Smuggler Mountain Printable Trail Map 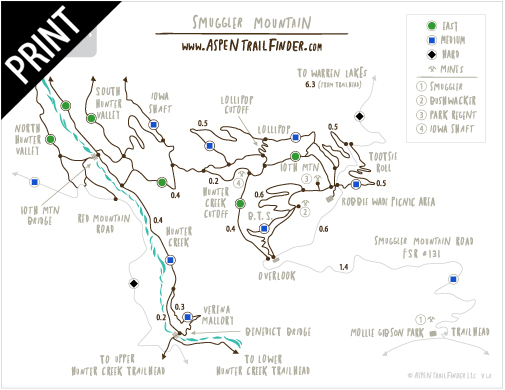