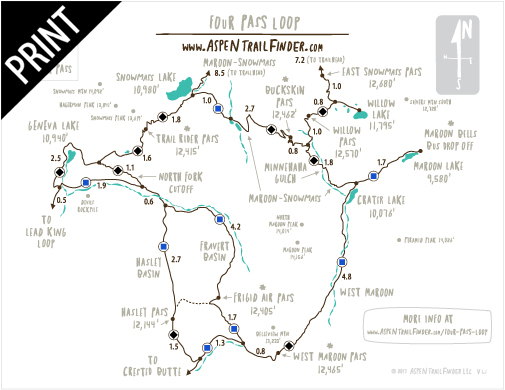 The White River National Forest Four Pass Loop Trail Guide narrative reads: (Click to expand)
From the White River National Forest West Maroon Trail to West Maroon Pass Trail Guide
“The trail starts at the Maroon Lake parking area traversing through a meadow to the far end of the Lake and a Forest Service bulletin board. The Maroon-Snowmass Trail is to the right. It climbs 1.8 miles through aspen trees to Crater Lake. Take the left fork at the Crater Lake bulletin board. The West Maroon Trail skirts the right side of Crater Lake. After the lake the trail follows the stream for a short distance and then enters the forest. Upon emerging from the forest you will cross a rocky scree field. The first stream crossing is in a little over three miles. This crossing is fairly wide and can be extremely dangerous during high spring runoffs. The trail on the other side is not always visible before crossing. The trail climbs through forest and willow before reaching another stream crossing in an open area. After crossing, the trail angles to the right and climbs steadily through willow and then tundra. This area is very open and the pass can be seen in the distance. The trail continues to climb steeply through switchbacks followed by a long traverse that ends at the top of the Pass. The views are spectacular on a clear day. From the top of the pass the trail descends on the other side to the East Fork Creek Trail and Schofield Park into Crested Butte or Frigid Air Pass.”

From the White River National Forest Four Pass Loop Trail Guide
“Use the trail guide for West Maroon Trail to West Maroon Pass until you reach the pass. From the top of the pass a series of switchbacks descends from a steep scree field into meadows of magnificent wildflowers before the trail reaches the valley floor. A scattering of campsites can be found on shelves during this descent. A mile below the pass the trail intersects with the Frigid Air Pass Trail. Go right.

The trail continues through a valley of wildflowers and ascends steeply for about 1 mile toward a series of ridges. Frigid Air Pass can be seen through a gap just past the ridges. The trail continues straight to a broad saddle leading to Hasley Basin. After passing a small pond it turns right and ascends a steep incline. A trail sign marks this turn. The pass is reached through a series of very steep switchbacks. From the pass Fravert Basin can be seen as well as the back side of the Maroon Bells.

The descent from the pass is via a series of steep switchbacks which lead into a more gradual descent through wildflowers and alpine scrub. As the trail enters a spruce forest, it begins another steep descent toward the North Fork of the Crystal River. As the trail follows the river through the spruce forest, good campsites can be found. Remember to camp 100 feet from both the stream and the trail. About 1-1/2 miles farther the trail begins a series of steep switchbacks following the rapidly falling stream which becomes a magnificent waterfall when it enters the gorge. In another mile the trail branches just after a small clearing.

The left fork leads to camping at the Love’s Cabin area. The Four Pass Loop Trail, although poorly defined, turns right and heads toward the North Fork of the Crystal River. After crossing the Fork, continue for 3/4 of a mile into a spruce forest. As you leave the woods take the right fork marked by a sign and head toward Trail Rider Pass. The trail ascends steeply through open meadows and aspen for 1-1/2 miles then reaches a stream where it forks to the right. The left fork goes to Geneva Lake. Follow the trail crossing the stream several times then ascending to the top of a ridge on the right. From here, the trail wends around a small lake and the pass is clearly visible. After reaching Trail Rider Pass, Snowmass Lake can be seen below.

The trail descends to the lake switchbacking through alpine meadows to the ridge above the lake. Follow the trail which continues to descend to the east side of the lake. At the far end of the lake a trail intersection goes left to the campsites. Continue straight and immediately cross a small stream. About 200 yards ahead is the intersection for the Maroon-Snowmass Trail. The trail heads right, toward Buckskin
Pass, by descending through a forest then into a meadow where the back of the Maroon Bells can be seen. Soon the trail crosses Snowmass Creek. Stay on the main trail which bears left and steadily ascends, steeply switchbacking, up to the top of a ridge. About 1-1/2 miles after the Snowmass Creek crossing, the trail crosses two small streams at timberline. This may be a good place to camp as campsites are not available until after crossing Buckskin Pass and entering Minnehaha Gulch. Buckskin Pass can be seen on the ridge to the left of the large boulders. The trail ascends switchbacking through an alpine meadow. The final ascent to the ridge is via a very long switchback. The ridge offers spectacular views of Snowmass Mountain, Snowmass Lake, Capitol Peak and Mt. Daly. Buckskin Pass is just ahead.

As the trail crosses the pass, Pyramid Peak and Maroon Bells (on the right) can be seen. The trail descends through a series of steep switchbacks to the alpine meadow below. Follow the trail through the meadows until it reaches a trail sign for the Maroon-Snowmass/Willow Lake Trail junction. Take the right fork. Continue through the meadow for about 1/2 of a mile to enter Minnehaha Gulch. Camping can be found here and is prohibited in the alpine meadow. Follow the trail which descends steeply through the gulch where it crosses a stream about 1/2 of a mile further. The trail continues to descend steeply through the gulch, enters a spruce forest and eventually a stand of aspen trees. Upon entering the aspen forest, Crater Lake will be visible to the right. Continue on the trail to where it intersects with the West Maroon Trail at a Forest Service bulletin board. Take the left fork continuing on the Maroon-Snowmass Trail for 1- 3/4 miles to Maroon Lake and the end of a grand adventure.”

I wrote up a detailed report after completing the Four Pass Loop a couple years ago. I included a ton of pictures and logistical info, so it may be useful for people playing to go on the trek! Here it is: https://backpackers-review.com/trip-reports/four-pass-loop-maroon-bells/

This is the crown jewel of the Maroon Bells-Snowmass Wilderness! It’s a good loop clockwise or counter clockwise and really depends on how many days/nights you want to spend so your camp site is in a great spot. Snowmass Lake is just stunning! Also, a great add on to the Four Pass Loop is Geneva Lake. It adds about 4 miles and makes a bigger loop and you still get all of the passes in. It’s around 30 miles if you do it, but you can’t go wrong on the Four Pass Loop! This was the best part of my… Read more »