The Crystal Mill, also called Sheep Mountain Tunnel Mill, is an old mill found along the Lead King Loop. The mill dates back to 1892. It used a waterwheel to generate compressed air for mining machinery in the nearby silver mines. This is a historic site on the on the rocky dirt Crystal City Road (FSR #314) near Marble, CO.

The National Register of Historic Places description reads: (Click to expand)
“The Crystal Mill is a log and frame structure built in 1892 originally as a powerhouse. The building has a dramatic location on a rock outcrop on the Crystal River in mountainous terrain near Marble, Colorado. The mill is composed of three parts: the compressor house, the gear house, and the penstock.

The compressor house is hand peeled round log construction, V-notched at the corner joints. It is 20′ by 50′ with board and batten gabled ends. The west wall, which faces an adjacent building (now in ruins), contains a door roughly in the center of the wall, a double hung window to the south end, and a small window on the north end of the wall. On the opposite (east) wall, is another door, roughly in the center with one, window on the north end of the wall. The south wall, only sections of which remain, probably contained no openings. The north wall has a window in the gable and an open portal into the gear house.

The small one-story gear house is board and batten with gabled ends, the pitch of its roof matching that of the compressor house. The structure was once supported by the penstock posts on the water side and the bottom log of the compressor equipment house on the land side. A door is located on the north wall which once led on to a railed platform (now gone). The west wall contains a small window, roughly in the middle.

Beneath the gear house are the remains of the penstock, constructed of rough milled beams using common mine timbering techniques. The horizontal braces, roughly 6″ by 6″, are bolted onto large 12″ by 12″ vertical beams.

The water wheel and all mill machinery are no longer present. The dam system which once diverted water from the Crystal River to drive the mill machinery has not survived.

The present condition of the mill is deteriorated. However, recent restoration efforts (1984) have attempted to create support for the penstock and gear house. In 1976 a new
roof and partial concrete footings were installed, along with a cable system which sought to prevent the mill from leaning further into the stream, (Undercutting by the river of the gearhouse and penstock had resulted in severe shifting of those portions of the structure and caused structural problems in the compressor house as well.)”

The National Register of Historic Places significance reads: (Click to expand)
“The powerhouse at Crystal known as Crystal Mill is notable in Colorado for its association with the development of the metal mining industry. It may be unique in the state for its use of water to generate power for historic underground mining-operations. The powerhouse was also locally significant in that it facilitated the mining process and allowed mining to continue in Crystal at the period of the Silver Crash when mining was not generally lucrative. Therefore the survival of the community of Crystal owes much of its existence to this power generating facility.

The log and frame building on the Crystal River for many years has incorrectly carried the label of “mill”. In fact the structure was built in 1892 for use as a powerhouse, containing machinery to generate power to run equipment for mining in the Sheep Mountain Tunnel. A turbine water wheel which generated over 90 horsepower was the propelling force which operated a compressor. The compressed air was carried through pipelines to air drills. The power to run the machinery was acquired by darning the Crystal River
near the entrance to the Sheep Mountain Tunnel at the confluence of the north and south forks of the Crystal.

The project was part of the mining operation of the Sheep Mountain Mining and Tunnel Company. In addition to the mine at Sheep Mountain, the powerhouse supplied power for the Inez, Bear Mountain, and later the Black Queen in the Crystal area. Electric lighting was also provided in the mines by a dynamo that was later installed in the powerhouse.

The plant continued to produce power for the mines until 1917 when mining operations ceased. At some point after 1917, all the existing equipment inside Crystal Mill was removed. This may have taken place during World War II when scrap metal and unused
machinery was removed in most of the accessible mills and many mine-related structures in the state as part of the war effort. As a result, few historic mills in Colorado survive with their integrity of equipment intact.

Crystal Mill has been owned since 1954 by Treasure Mountain Ranch, Inc., who have demonstrated an interest in its preservation. It has come to represent to many Coloradans and tourists early day mining. Reportedly, it is one of the most highly photographed sites in the state and appears in many publications, calendars, and other printed matter. The mill’s recent endangerment was a concern given state-wide attention. Fund-raising efforts were initiated and some stabilization work conducted.

Known historically as Sheep Mountain Tunnel Mill and Crystal Mill, the structure has also been referred to as Lost Horse Mill and Dead Horse Mill.” 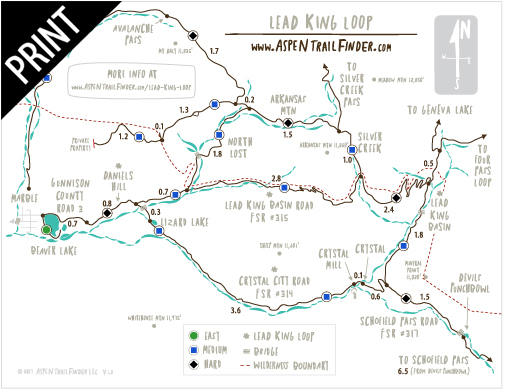 How is the condition of the road?