The Red Mountain Trail, also called the Jeanne Golay Trail and Red Mountain Road, is an intermediate/moderate trail you can hike, run, and mountain bike that is dog friendly. The trail/road is 3.5 miles from the gate to the Red Mountain Cross. The road begins with a short paved section to the Red Mountain Water Treatment Facility and then is dirt the rest of the way up Red Mountain. This is a trail in Glenwood Springs, CO.

Red Mountain Trail, also called the Jeanne Golay Trail and Red Mountain Road, is a difficult trail you can snowshoe and fat bike that is dog friendly. This is a plowed winter road in Glenwood Springs, CO.

In 1991 Jeanne Golay of Glenwood Springs won the annual “Assault on Red Mountain” cycling race on this trail.

In 1992 Jeanne trained on this trail and went on to win 3 gold medals at the National Roadracing Cycling Championships. Later that year, Jeanne finished 6th overall, and 1st on the U.S. Team, in the cycling road race at the 1992 Olympics in Barcelona, Spain.

The citizens of Glenwood Springs proudly dedicate this trail in recognition of Jeanne Golay and her outstanding cycling accomplishments.”

Skiing in Glenwood Springs began in the late 1930’s when J.E. Sayre donated several tracts of land on Red Mountain to the city of Glenwood Springs for the development of a ski area. Volunteers cleared and groomed a small area of the slopes and by the winter of 1938, ski instruction had begun.

In 1940, a group of local businessmen set about to enhance the ski area with the installation of a chairlift. They purchased a tram and wire cable from a mine near Ouray and with the help form Civilian Conservation Corps workers, locals built a ski lift to serve local skiers and visitors alike. Despite closures over the next decade due to problems with ski lift safety and the onset of World War II, Red Mountain Ski Area would operate until 1947.

City Council in 1951 awarded the ski area lease to Joe Juhan. As part of the lease, juhan was required to replace the 15 wooden lift towers with 18 steel towers. He widened and improved the trails and hired former 10th Mtn. Division ski instructor, Ed Jones, to run the ski school. Lift ticket prices were $2.50 per day and a season pass was $32.50.

Lack of sufficient snowfall and competition from newer and more modern ski areas proved to be the demise of Red Mountain Ski Area in the late 1950’s.

Margaret “Cap” Smith made one final attempt to revive skiing on Red Mountain by moving the chairlift higher on the mountain and installing a double chair. Glenwood Mountain Park was open for the 1965-66 season, before closing the book on Red Mountain skiing once and for all.

Outdoor enthusiasts familiar with the Moab, Utah area may be interested to know that Negro Bill Canyon, a popular hiking and biking trail there, is named for William Grandstaff. He lived in the canyon prior to coming to the Glenwood Springs area. Upon arriving here, Grandstaff opened a saloon where South Canyon meets the Colorado River, serving the miners of the coal camp at South Canyon. Later, Grandstaff sold the saloon operation and settled on Red Mountain.

When using this trail please keep in mind: 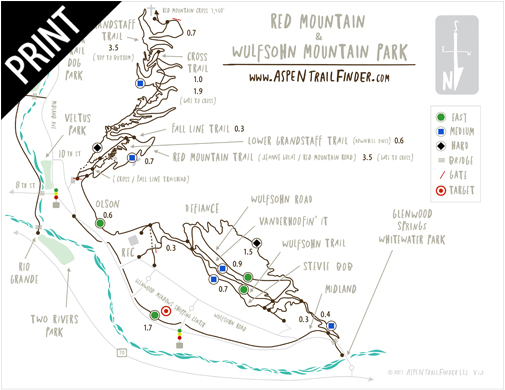